July 03, 2020
I've gotten inspiration and guidance from so many other game designers while working on Deck of Wonders, but it's rare to find someone else working on a dedicated solo game. That's why I was so excited to connect with Joe Slack, the designer of solo adventure game Relics of Rajavihara! I had a chance to try Relics of Rajavihara at Virtual Gaming Con, and can't wait for the game to launch on Kickstarter in just a couple of days. Joe also shared some of his biggest lessons learned while designing a solo game, and they were so relevant to Deck of Wonders I asked him to share them here as a guest blog. Enjoy the below article from Joe, and check out Relics of Rajavihara on Kickstarter July 7th!

I wrote this article about the development of my solo adventure game, Relics of Rajavihara, to help other designers who are thinking of designing their own completely solo game or are in the process of designing one.
I also wrote this for anyone who is interested in seeing how the design of a game, particularly a solo game, comes together. Kind of a behind-the-scenes look at creating a solo game.
Please let me know if you have any questions or if there is any related topic you'd like to hear about in a future post.
So, let's jump in!
About two and a half years ago I had an idea. I had been playing a lot of NES puzzle games, like Adventures of Lolo, and one of my favourite games of all-time, the lesser-known Fire n Ice. I also recalled a game that my nephew used to play called River Crossing by ThinkFun, that used level cards that were set on a board, with planks you had to strategically move around to get from point A to point B.
I started thinking, "I've never seen a blocky 3D tabletop puzzle game similar to this. I wonder if I could create one."
It started out pretty simple. An 8x5 grid with some wooden blocks, a meeple, and a wooden heart (the goal). I called it the "that puzzle logic cube game." I know, pretty original, right? :)
Here's what it looked like: 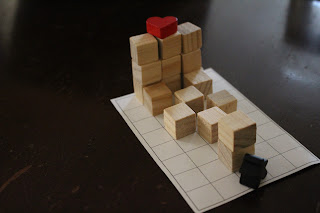 It was kind of boring and bland. But the concept held up and the puzzly nature of the levels was really cool.
Lesson #1: If you have an idea, get it out of your head and onto the table to test it quickly.
Then I added some new elements, a bit of a backstory about being a knight trapped by an Evil wizard, and it became "Montalo's Revenge": 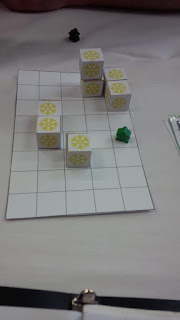 I took it to Breakout Con, the largest gaming event in my hometown of Toronto, and showed it to a few other game designers, who played a few of the levels and loved the concept. But it was only after watching them play this and try to solve levels co-operatively that I knew this was definitely best suited as a solo game. It tended to end up with one person moving blocks around and trying to figure things out while others watched, which was not the experience I wanted everyone to have!
So, I embraced this as a solo only game, and never looked back.
Lesson #2 I learned on BGG: Your game will find it's identity. Just give it time.
You can't force this. If it's meant to be played by only one player, make it the best solo experience you can.
I continued to create more levels and the mechanics really came together as I added need blocks. Boulders, ice, fire, and water were added to the original wooden crates. The gameplay was becoming very interesting and it was always challenging.
But I felt the theme needed some work. I felt Knight vs. wizard or knight saving the princess was overdone. I wanted something different.
So, I brainstormed some ideas, narrowed them down, and polled a solo gaming group. The winner, by far, was an Indiana Jones-style adventure theme.
The people had spoken.
Lesson #3: Give the people what they want!
I researched some temples around the world and fell in love with Ta Prohm, which used to be called Rajavihara.
Soon the game would have a new identity, as Relics of Rajavihara.

It was also around this time that a publisher showed a lot of interest in the game and took a copy to evaluate. Even though I could have pursued this route and had pitched and signed games with other publishers, I always wondered if I could do this on my own.
I spoke with and learned from other successful solo game creators and felt that this game not only had something unique to offer to the market, but that I could also be the one to promote it, build a following, and publish myself.
So, I requested my copy of the game back, hired the amazing Tristam Rossin to create all the art and graphic design for the game, and never looked back. 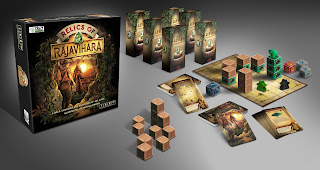 Lesson #4: Learn as much as you can from others who have been there before.
In terms of how the game went from a series of individual levels to a full-blown campaign, here is what happened:
I started by making levels with just the crates, but quickly realized that there was only so much I could do with them, and that the levels might become boring and too similar. So, I started coming up with new types of blocks that all acted differently. This really added a new dimension to the game. With these additions, the game naturally flowed into sets of floors, where each new floor would introduce a new type of block. Then I came up with the idea of introducing each floor in a separate envelope or tuck box, almost like a legacy game, but without ripping up or modifying the components.
Some levels just weren’t good enough. Or they required too many components. Or the setup was too long. They all had to go. New, better levels replaced them.
As I got further along, I had to put on my developer hat. I had 52 wooden blocks, which would cause the production cost to be much higher than I wanted. So, I needed to ask myself, “are they all needed?” I started to streamline the levels down to their bare bones and tested them thoroughly. By the end, I was able to reduce this to 38 wooden blocks, which brought the manufacturing cost down just enough, while still making for a great experience. This actually tightened up some of the levels, making them even better.
Somehow, the original 8 x 5 grid I came up with survived all the way through.
That's lesson #5: Design within constraints.
Giving yourself too much freedom can make design decisions much more difficult. If you have to stay within certain parameters, you can't just keep adding things to your game (that won't necessarily make it better).
My restraints were the size of the board, along with the number of each type of block I could use.
Also, every designer has their own process. Some designers create games based on a theme. Others design around a mechanic. I prefer to design around the player experience.
Lesson #6: Create the experience you want players to have and stick to your vision.
In this case, recreating some of that nostalgia and feel of playing a digital puzzle game, but adapting it to the tabletop world. I wanted to create a game that would make you think and feel challenged, but that would also feel oh-so rewarding when you beat that level you thought was nearly impossible.
I had some playtesters say they played games like this when they were a kid and didn't care for it.
And that's ok. No game is made for everyone. But my experience showed that there definitely WAS a market for Relics of Rajavihara.
Lesson #7: Understand who your audience is and make a game for them.
If you try to make a game for everyone, you'll only be making a game for no one.
One of the biggest compliments you can get from a player is having them ask to play your game again.
Having built a 50-level campaign, I didn't want people to play the game once and then have it collect dust on the shelf. It wouldn't feel like a good value to the player and it wouldn't feel right to me. Sure, it would be easy enough to create expansions if the game was successful, but I didn't want to make players wait for this or be forced to buy more content if they wanted to play more.
So, I set out to find a way that players could unlock a new replayable solo challenge mode.
I tried various ways to accomplish this. Many of them just didn't work. But then I finally hit upon the solution - a way to replay some of the levels from the campaign with all-new combinations of challenges. It took some work, but in the end I came up with over 2,000 different combinations. Now that's a replayable game.
And that's our final lesson. Lesson #8: Keep them wanting more
I hope you found this interesting and/or helpful! Please check out Relics of Rajavahara on Kickstarter when it launches on July 7th!