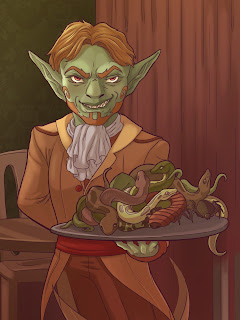 I recently finished my final balancing design pass of the second Villain in Deck of Wonders: Aurora the Empath. To celebrate, I thought I'd break down the journey of how one of the more unique cards in her set, Gnomish Gnegotiator, came to be! Sad to say I don't have art to share for Gnomish Gnegotiator (yet), but what follows is a mechanical breakdown of how the card evolved into its final form. If you want to help bring Gnomish Gnegotiator (and the rest of Deck of Wonders) to life, please support our Kickstarter!
As an empath, Aurora senses, manipulates, and exaggerates the emotions of everyone around her. The cards in her set play on that theme, and early on I had the idea for a lawyer/attorney type of minion that would swoop in to defend their "client" and make everyone doubt the conviction of someone they thought they had dead to rights. Mechanically, my first pass looked like this:
This minion would be able to hide behind any other priority 2 or higher minion, and when a higher-priority minion would be destroyed, this minion would not only step in to take their place, but would draw a card for the Player as well! The downside, I thought, was that it needed to be played in conjunction with a higher-priority minion, and was vulnerable to being taken out directly, losing its effect. I wasn't sure how to balance the Villain side yet, so I made it a replica of Gnomish Servant with the intent to play a bit and then update it.
I quickly realized that the wording created some questions around how the card interacts with Deck of Wonders' priority system (the set of rules that act at the AI for Villains) and the way minions trade damage. Changing the working to specify that the lawyer minion's effect happened AFTER the other player minion was destroyed cleared those things up:
With the mechanics clearly articulated, I quickly realized how overpowered the card was for the Player. Saving another minion while potentially destroying its attackers AND drawing a card is a huge swing! At 2 priority, it was also way too easy to find a minion to combo with. That's the first place I tried balancing:
That helped, but I was honestly already holding off on the card until I had a larger 3 or 4 priority minion to play it with anyway. Next I tried balancing with the damage and health of either side:
This helped, but it was still overpowered for the Player. It was around this time that I had the idea for the card's name. I wanted a word for lawyer/attorney that felt more at home in a fantasy world, and the second I thought of "negotiator," I knew that Gnomish Gnegotiator would be perfect! Gnomes in the world of Deck of Wonders are masters of social intrigue, so it was a great fit with the mechanics of the card.
As I thought about the idea behind the card, I wanted the Villain side to give that same feeling of stepping in and interfering with what the Player actually wanted to do. I realized that giving the Villain side Taunt (meaning it would have to be destroyed before the player targeted anything else) was the perfect way to create that feel. I also asked myself whether the minion body was important to the Player side of the card. I'd already nerfed its stats literally as far as possible, so was there a way to create the same effect without having a body at all? The unique format of Deck of Wonders cards allows me to make the Player and Villain sides radically different if I want to, and this seemed like the perfect place to leverage that. This led me to probably the biggest single set of changes to Gnomish Gnegotiator, but also the most successful:
These changes put Gnomish Gnegotiator in a great place. Making it a spell forces you to choose which minion to protect when it's played, rather than during the Villain attack phase. That makes it a bit harder to use effectively, but rewards anticipation and mastery, giving the card a higher skill ceiling. The huge upside of using it well is also offset by the fact that, if you don't have a 3 or higher priority minion, Gnomish Gnegotiator is effectively a dead card on the Player side. Those changes, plus adding Taunt to the Villain side, resulted in a card that is balanced, fun, and true to the idea behind it!
Hopefully that gives you a window into my design and balancing process. I can't wait for you to play with Gnomish Gnegotiator (and all the other crazy cards in Deck of Wonders) when it Kickstarts in August! Please follow Deck of Wonders on whatever socials you like to stay in the know.
Click here to back Deck of Wonders on Kickstarter!