All About Deck of Wonders 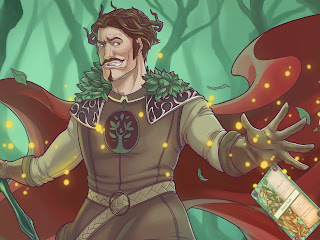 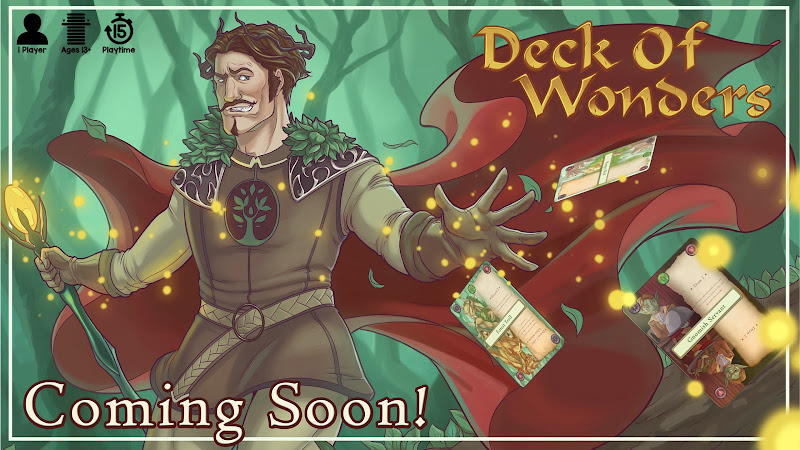 You have stolen the Deck of Wonders from Fate herself, and now she's unleashing all manner of magical minions to take it back! Her Villains beset you on all sides, and you must out-play them with the Deck of Wonders, even as they try to stack the deck against you.

Deck of Wonders is a 1-player expandable card game with legacy elements. It captures the feel of playing collectable card games like Hearthstone and MTG, but in a solo format that evolves as you play. Defeating Villains progressively unlocks new cards, challenges, and other twists, transforming the deck into a unique reflection of your decisions and accomplishments!

Start the game by choosing which Villain to square off against. Each one has special rules you must follow and special cards you must use while facing them. Each Villain also has their own set of legacy cards that you can only unlock by completing specific objectives while fighting them.

The Villain’s cards make up half your deck. The other half is built from your collection of cards in one of 3 ways:

Every card has a good side and an evil side, which are used when the card is drawn on the Player turn and the Villain turn, respectively. This has a balancing effect on decks: if a card has a powerful minion on the good side, there’s likely something equally powerful on the evil side. This means you have to carefully weigh the benefits and dangers of each side when deckbuilding, as well as how those sides interact with other cards and the Villain’s unique rules. 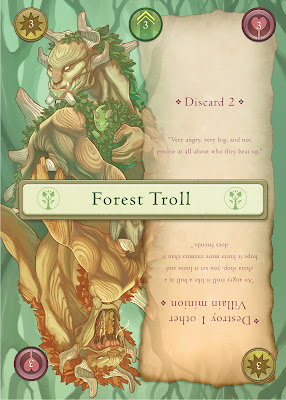 With your deck built, you and the Villain will take turns drawing cards, summoning minions, and casting spells to vie for control. The overall objective is to reduce the Villain to 0 health before they do the same to you, but expect many twists and turns along the way!

A set of rules called the Priority System (in addition to a Villain’s unique rules) govern how the Villain behaves on their turn. The Priority System gives the Villain several distinct advantages (Fate seems to be on their side, after all), but understanding and manipulating it can create a path to victory against all odds.

As you achieve various feats and milestones across games, you’ll unlock multiple legacy packs for each Villain that introduce new twists. These keep the experience fresh and exciting, and offer new deckbuilding challenges as the Villains’ stories unfold.

Once again, I'd love to hear what you think! Let me know in the comments or on any of the socials below. If you'd like to see the game in action, you can watch a full game playthrough on TTS here.
Click here to back Deck of Wonders on Kickstarter!

Not-Overly-Kiddy Board Games to Play with Kids Under 10

July 19, 2020
I asked a couple days ago about games that were great to play with kids, but were also fun for adults and not overly saccharine in terms of the theme. The response was overwhelming! Well over 200 different games were recommended, some by upwards of 20 people.
Since Facebook comment threads are near-impossible to parse, I took the time to aggregate the responses into the graph below. Note that I tried to catch misspellings or any obvious joke answers (noted with an "lol"), but some may have gotten through. There were also so many games, that I only put those mentioned twice or more into the graph. Please note that these are all games people suggested, so being mentioned even once is admirable. You can also see the full list in the table below the graph. Enjoy, and let me know how playing these games with your kids goes!
Oh, and I'm launching my own game Deck of Wonders on Kickstarter in late August, and would really appreciate any support you could throw my way!
NameVotesKin…
Post a Comment
Read more

Play the Deck of Wonders Demo in TTS

August 13, 2020
Ahead of our Kickstarter launch on August 25th, I know people will be curious as to how Deck of Wonders actually plays. You can watch a demo playthrough or an explainer video (both posted below), or even read the rulebook, but there's really no substitute for jumping in and actually playing the game for yourself. That's why I'm excited to announce that the Deck of Wonders demo is now publicly available on Tabletop Simulator!!! Just follow this link to get the Deck of Wonders demo mod for Tabletop Simulator on Steam, and match wits against Cullin, the Spoiled Prince. If you're not familiar with how to get everything set up, you can use this guide. Good luck, and I hope this piques your interest to support the full game when it launches on Kickstarter August 25th!To hear me walk through the rules and mechanics, check out this video: To watch a full game playthrough of Deck of Wonders, check out this video:
Click here to back Deck of Wonders on Kickstarter!
Post a Comment
Read more