May 28, 2020
UPDATE: Since this article was written, Deck of Wonders launched on Kickstarter, funded in less than 2 days, and is now racing through stretch goals! You can check the Kickstarter page out here, and I've added the full, final art for Forest Troll in all it's glory to the end of this article. Enjoy, and you can check out a bunch more final card art here!
I've taken a very iterative approach to developing Deck of Wonders, and card art has been no different! Below is the journey of one card's art over the course of development so far. Forest Troll is one of my favorite cards in the game, and its art (at all stages) has become a kind of avatar for Deck of Wonders. I'm sure it will evolve even further before the game is released (e.g. the card template is obviously still in development), but it's really fun to look at how it's evolved over time! Let me know your thoughts on where Forest Troll and the card template should go from here, and let me know if you'd like to see this kind of overview for any other cards!
I do all my prototyping with a normal deck of playing cards, and a reference sheet in Excel indicating which playing card is what. 9s were the original card that represented Forest Troll, and I had originally given them 4 health instead of 3. That changed in the first couple of games when I lost every time and failed to kill even a single Villain Forest Troll. 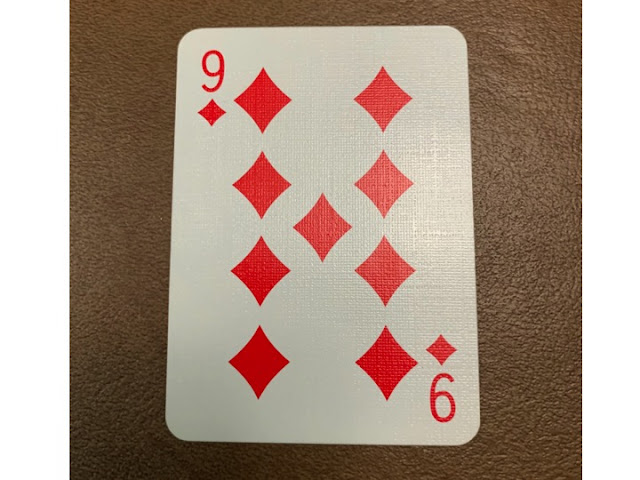 When I decided to preview my game at Gen Con, I knew playing cards wouldn't cut it, so I mocked up a wireframe prototype using shapes in Powerpoint. At that point my idea for the layout was that the card would stay oriented the same direction no matter what, although it quickly became clear in practice that people would rather orient the card to have the active side "up". 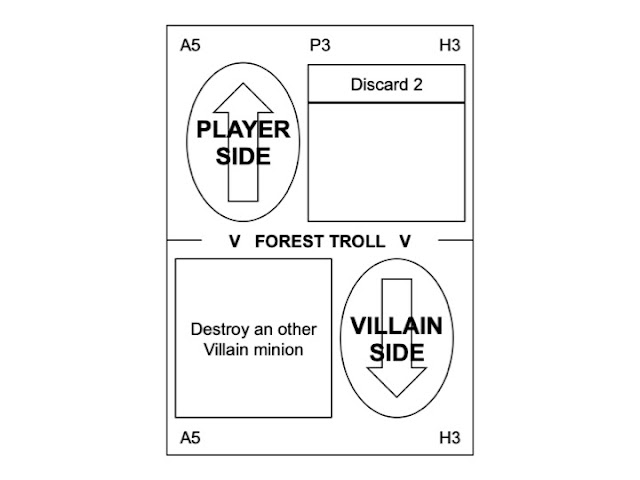 I didn't have time or money to commission art for every card, so I chose to leave art off of the original cards entirely. I had the idea of a mirrored image with slight differences by side (almost like a spot-the-difference game), and I wanted to be able to communicate that to people as I was demoing, so I asked Elsa Furia to mock up a few pieces of card art, and put those in the rulebook that came with the prototype. Forest Troll was one of 3 pieces of art she put together for me in a "children's book" style, and I love all the subtle differences between the two! 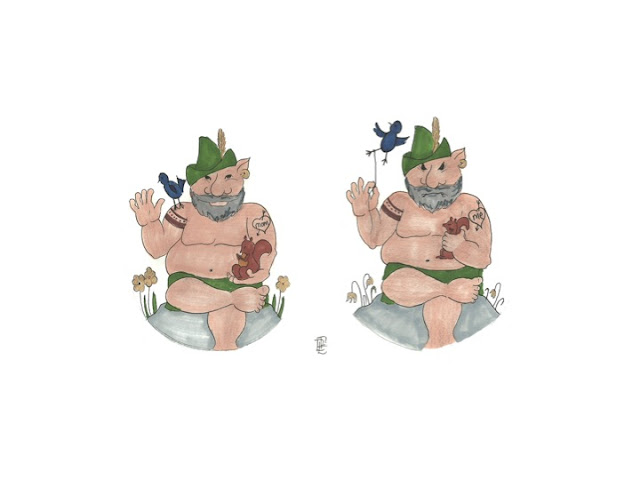 When my success at Gen Con proved I was on to something with Deck of Wonders (I'm still amazed that so many people bought an art-fee wireframe prototype), I knew I'd need art for every card if I wanted to get a better prototype together. I needed to stick with super-rough, black and white sketches to reasonably afford the volume of art, so Elsa gave Forest Troll a make-under to fit in with the other cards, including the idea to have him be more animalistic. This was a directional sketch she did on the way to the final "v2" prototype art. 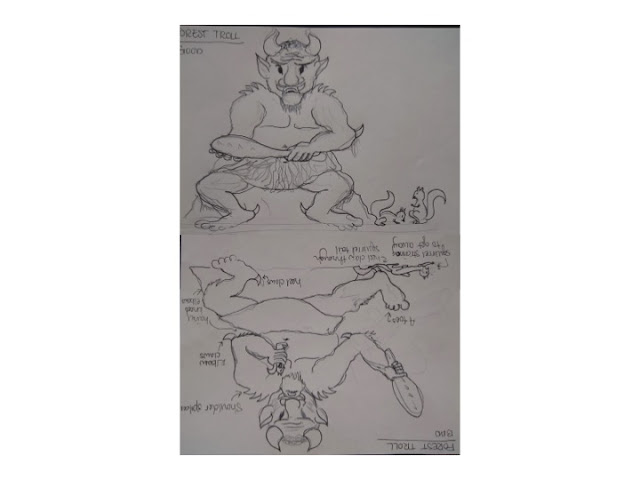 After a round or two of refinement, we settled on this design, telling the two-panel story of the Forest Troll seeing the player and then launching a boulder at them. This version was sold at CinCityCon and is still in use in the Tabletop Simulator version of the game. 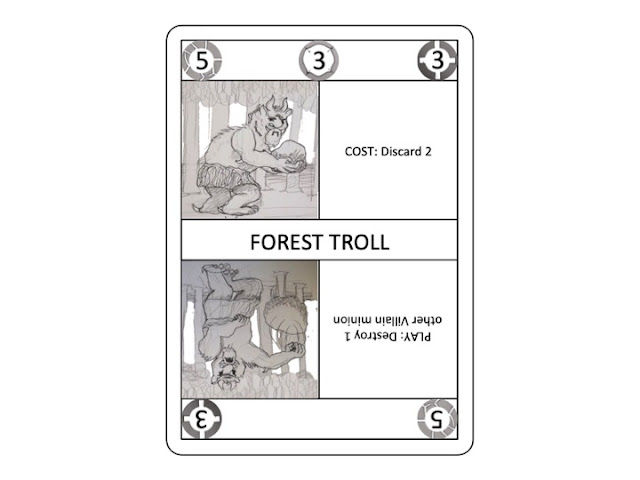 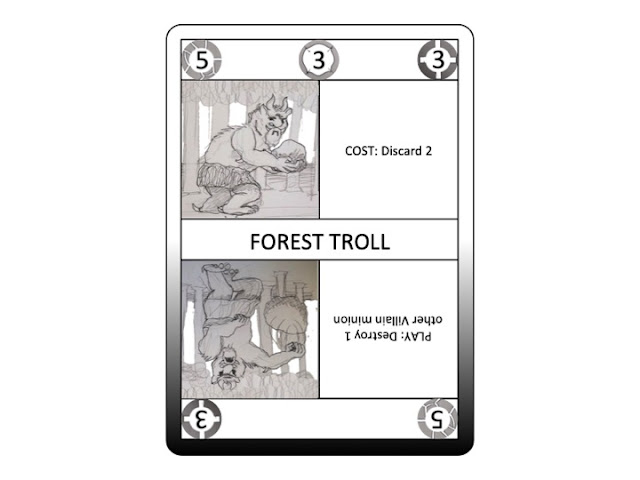 Between physical and PNP sales of the v2 prototype, I raised enough to commission final art for Deck of Wonders! I met Lauren Brown at Gen Con, and her style was instantly locked into my mind as the right look for the game. She took the animalistic look of Forest Troll to the next level, while weaving back in some of the "spot the difference" type ideas that were in the very first version of the card art. 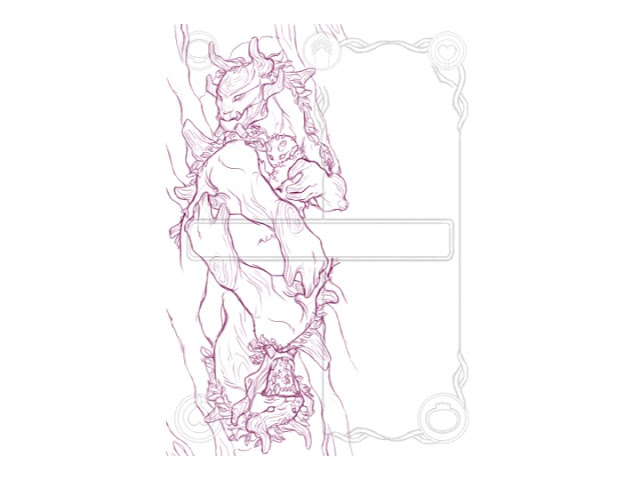 Cleaning up the roughs into line art didn't bring too many other changes. It was at this point that we had the idea that the Forest Troll might change colors with the season or with their emotion, but it was hard to know how that would work before color. 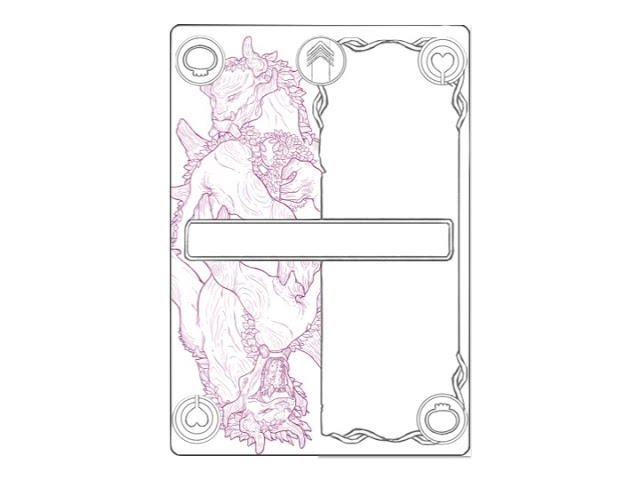 Turns out it works GREAT!!! I fell instantly in love with the color version of Forest Troll, and while the template will continue to evolve, I can't imagine how the card art could be any more perfect. 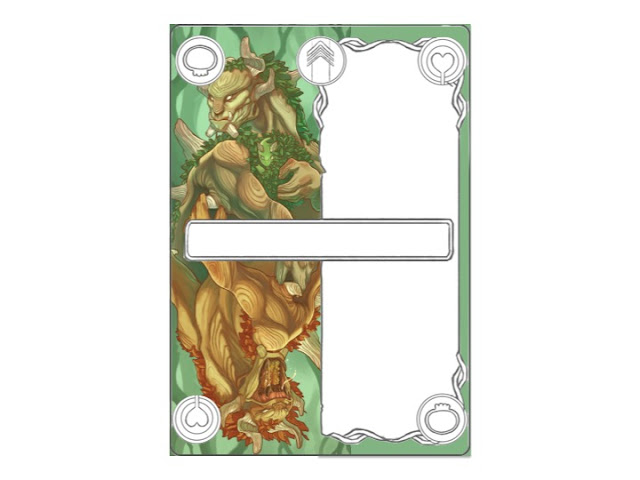